In OpenSesame you can create complex experiments using only the graphical user interface (GUI). But you will sometimes encounter situations in which the functionality provided by the GUI is insufficient. In these cases you can add Python code to your experiment.

Python is not supported in online experiments with OSWeb. If you need to run your experiment online, you have to use JavaScript instead.

You can find a set of basic tutorials and exercises to get you started with Python at https://pythontutorials.eu/.

Python in the OpenSesame GUI

Video 1. A screencast that the demonstrates the basics of using Python inline script in OpenSesame.

All Python code is executed in a single Python workspace. This means that variables that have been defined in one inline_script are accessible in all other inline_scripts, as well as in Python statements that are embedded in run-if statements and text strings. The same principle applies to modules: once imported, they are available everywhere.

For example, you can simply construct the Canvas in one inline_script ...

In order to use Python code you need to add an inline_script item to your experiment. You can do this by dragging the Python icon (the blue/yellow icon) from the item toolbar into the experiment sequence. After you have done this you will see something like Figure 1. 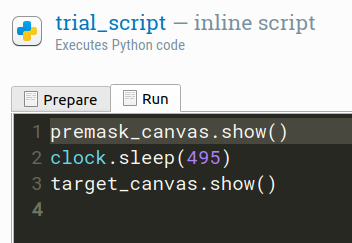 Loop tables and conditional ("if") statements

You can use single-line Python statements also where you would normally type static values, or would use the OpenSesame square-brackets notation to indicate values (i.e. [my_var]). To do so, you need to prefix an =. For example, you can use the following Python script as a run-if statement (see also Figure 2): 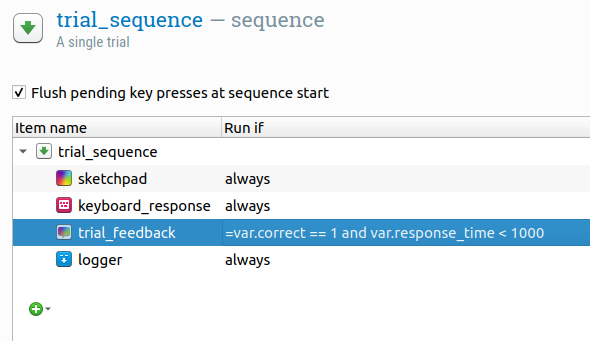 Figure 2. Using Python script in the run-if statement of a sequence item.

For more information about conditional ("if") statements, see:

Similarly, you can use single-line Python statements to define variables in loop tables. Let's say that you want to assign a random value between 0 and 1000 to a variable. You could this by first importing the random in an inline_script. Once the random module is available, you could use random.randint() to obtain a random variable in a loop item: 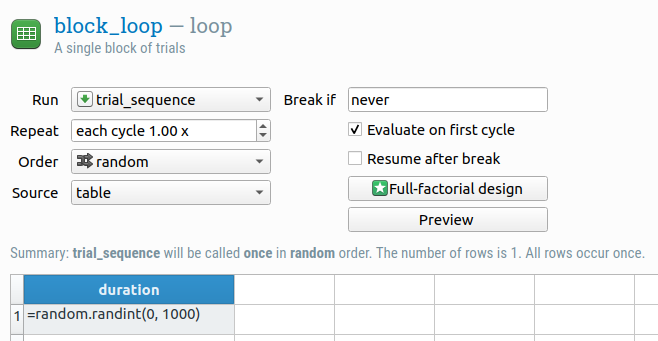 You can embed Python statements in text strings using the [=...] syntax. For example, you could the following text to a sketchpad:

Depending on your experiment's resolution, this might evaluate to:

The console is also an interactive Python interpreter powered by project Jupyter.

Many common functions are directly available in an inline_script item, without the need to import anything. For example:

You can access experimental variables through the var object:

A full overview of the var object can be found here:

Basic time functions are available through the clock object:

A full overview of the clock object can be found here:

A full overview of the log object can be found here:

You get the full path to a file in the file pool through the pool object:

A full overview of the pool object can be found here:

The responses object keeps track of all participant responses that have been collected during the experiment. For example, to list the correctness of all responses so far:

A full overview of the responses object can be found here:

The Canvas class is used to present visual stimuli. For example, you can show a fixation dot as follows:

A full overview of the Canvas class can be found here:

The Keyboard class is used to collect key presses. For example, to collect a key press with a timeout of 1000 ms:

A full overview of the Keyboard class can be found here:

The Mouse class is used to collect mouse clicks and screen touches. (OpenSesame makes no distinction between the two.) For example, to collect a mouse click with a timeout of 1000 ms:

A full overview of the Mouse class can be found here:

A full overview of the Sampler class can be found here:

If you are using the psycho backend, you can directly use the various PsychoPy modules. For more information, see:

If you are using the xpyriment backend, you can directly use the various Expyriment modules. For more information, see:

If you are using the legacy, droid, or xpyriment (only with "Use OpenGL" set to "no") backend, you can directly use the various PyGame modules. For more information, see: