Coroutines run multiple items in parallel—or, to be more exact, they run items in rapid alternation in a way that looks parallel. Not all items support coroutines. 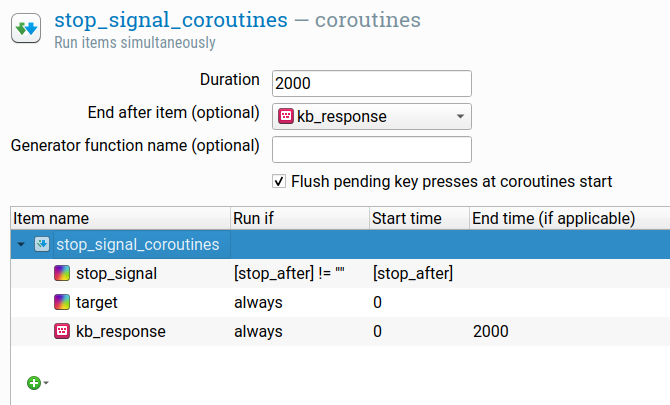 Figure 1. The interface of the coroutines plugin.

As you can see, the coroutines plugin looks similar to the sequence item, but has a few extra options:

Specifically, the example from Figure 1 (from the stop-signal-task example) does the following:

Currently, the following items are supported:

For example, say that you have a coroutines with two keyboard_response items, kb1 and kb2, and you want to run the coroutines until two key presses have been collected, with a timeout of 5000 ms. You could then create the following coroutines structure: 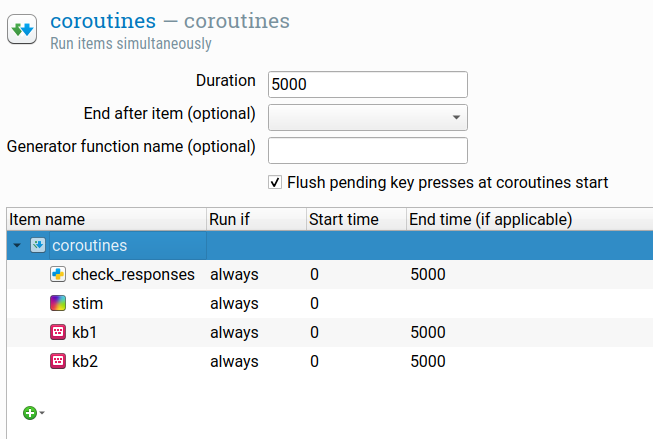 The check_responses inline_script would then first set both responses variables to an empty string in the Prepare phase:

And then, in the Run phase, check if both variables have been set, and abort the coroutines if this is the case:

Technically, coroutines are generators. Generators are functions that can suspend their execution (i.e., they yield) and resume later on; therefore, multiple generators can run in a rapidly alternating suspend-resume cycle. This trick is sometimes called weightless threading, because it has most of benefits of real threading, without any of the overhead or (potential) instability. Coroutines do not use threading or multiprocessing.

In the coroutines plugin, you can indicate the name of a generator function that you have defined in an inline_script. This generator needs to work in a particular way (as illustrated in the examples below):

The first and simplest option is to write a one-shot coroutine. This is a function that is called once to prepare itself, once to execute, and then terminates. For example:

A more complicated example is a coroutine that prepares itself, is then called repeatedly (and keeps track of how often), and then terminates:

Another example, which stops the coroutines when a response has been collected.