This tutorial requires OSWeb 1.4 or later

OpenSesame is a user-friendly program for the development of behavioral experiments for psychology, neuroscience, and experimental economy. For beginners, OpenSesame has a comprehensive graphical, point-and-click interface. For advanced users, OpenSesame supports Python (desktop only) and JavaScript (desktop and browser).

A Python-based version of this tutorial is also available. If you don't need to run your experiments online, then the Python tutorial is likely what you need:

Before starting to build the experiment for yourself, you can already participate in it. This will give you a good idea of what you're working towards in this tutorial.

Participate in the experiment! 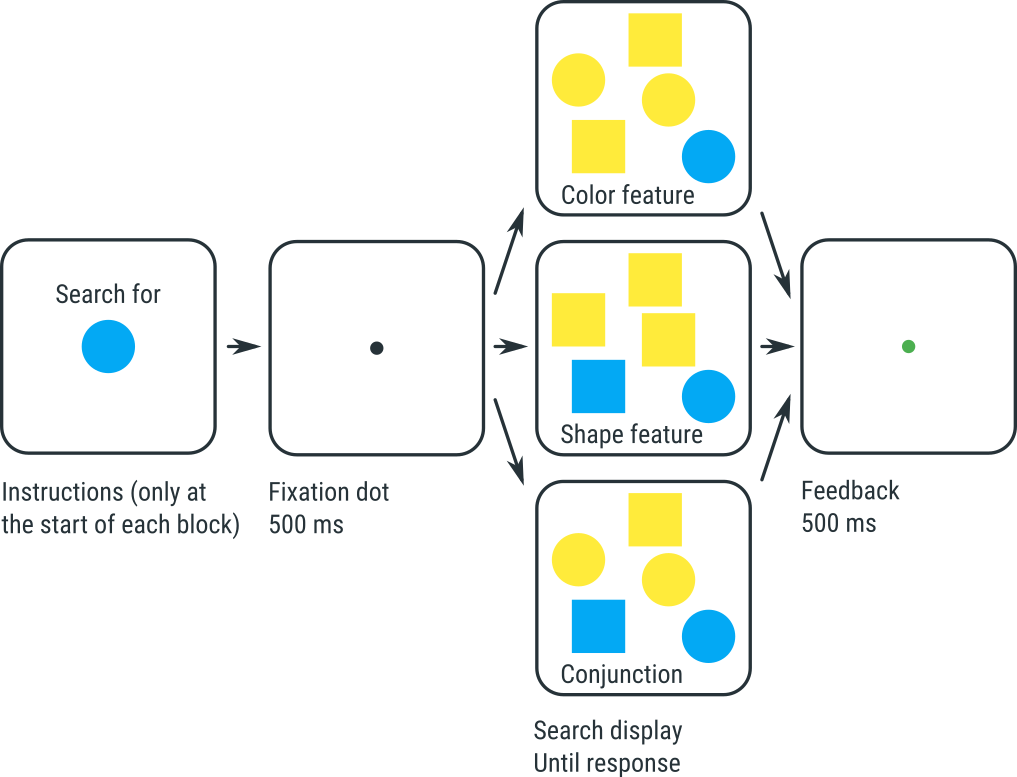 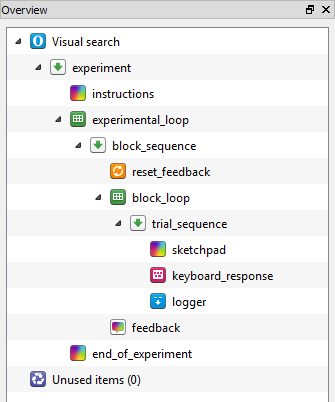 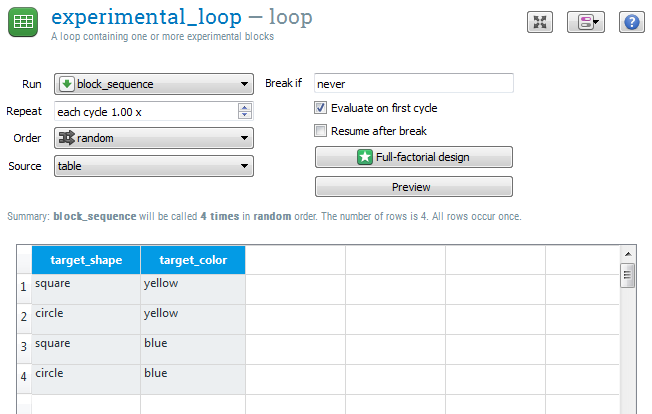 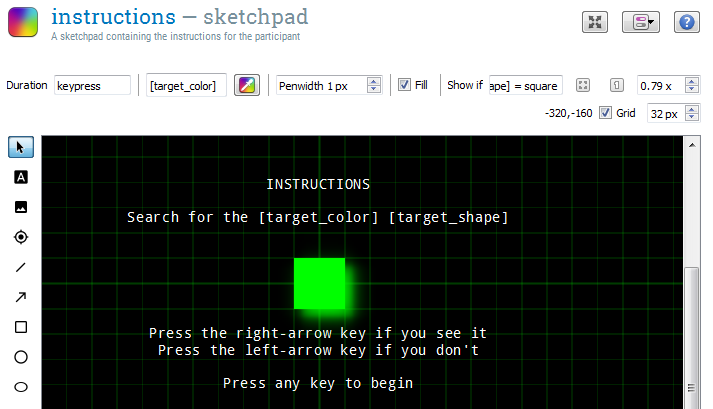 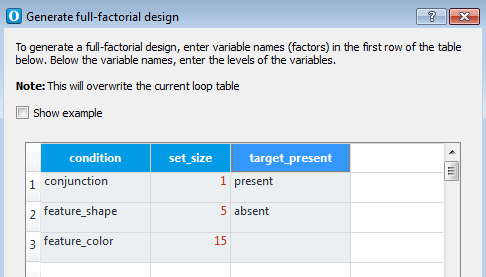 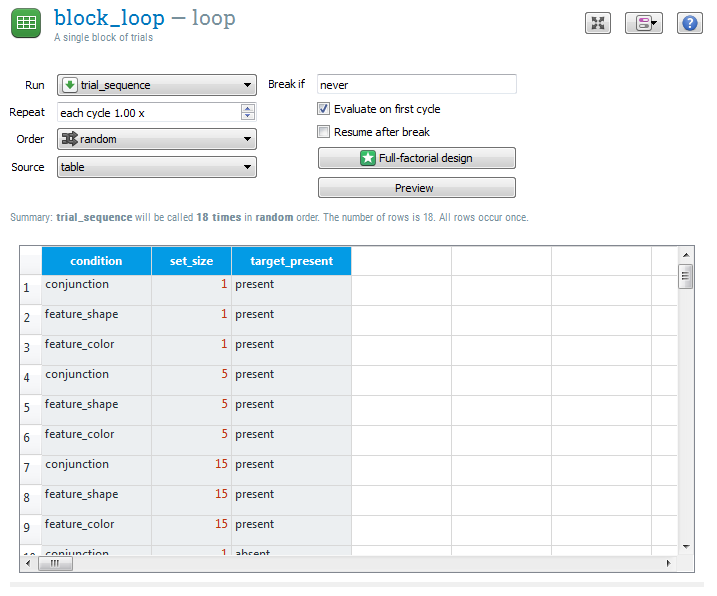 So the only thing that is missing is an inline_javascript. 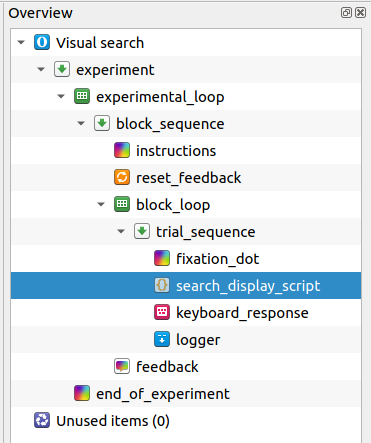 Now things will get interesting: We will start programming in JavaScript. We will use two guiding principles: top-down and defensive programming.

Note: The explanation below assumes that you're somewhat familiar with JavaScript. If concepts like Array, for loop, and functions don't mean anything to you, then it's best to first walk through an introductory JavaScript tutorial. You can find links to JavaScript tutorials here: 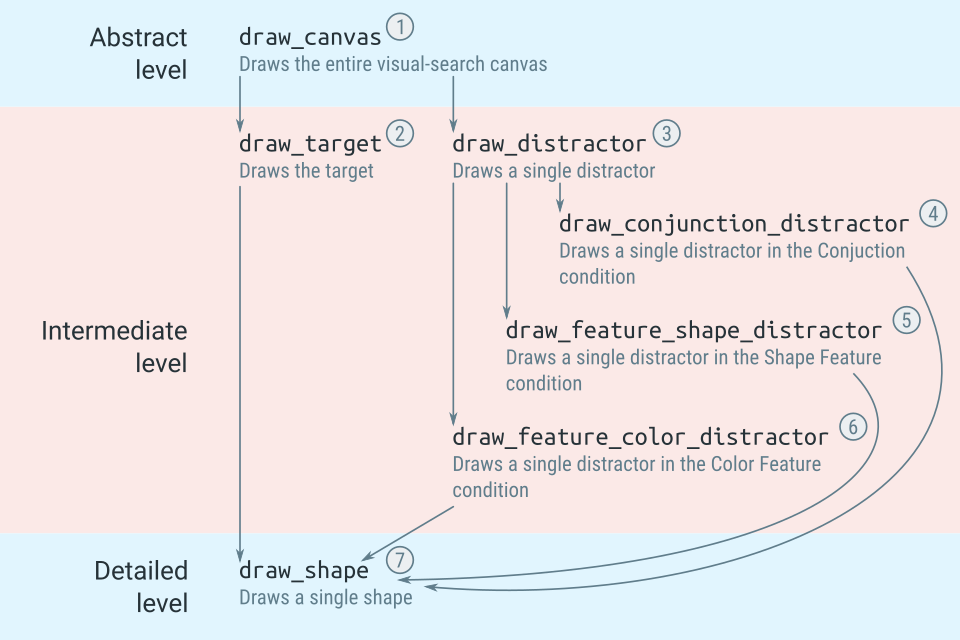 Choosing your version of JavaScript: ECMA 5.1 or 6

The formal name of JavaScript is ECMASCRIPT, which exists in different versions. The latest version, ECMA 6 (or: ECMA 2015), has a number of useful features. ECMA 6 is supported by most modern browsers, which means that you can use these features when running an experiment in a browser. However, due to a limitation of the js2py library, which is used by OpenSesame to run JavaScript on the desktop, you can only use ECMA 5.1 when running the experiment on the desktop.

In many cases, you don't really care about being able to run your online experiment also on the desktop, in which case it makes sense to make use of ECMA 6. This is also the approach that we will take for this tutorial.

In other words: we will use ECMA 6 syntax, and therefore we will only be able to run the experiment in a browser, and not on the desktop.

A Canvas object is a single display; it is, in a sense, the JavaScript counterpart of a sketchpad. See also:

We assign c as a property of the persistent object. This ensures that we are able to access c in the Run phase as well. This is necessary, because (unlike for Python inline_script items) variables are not automatically shared between different inline_javascript items, nor between the Run and Prepare phase of the same inline_javascript item. See also:

There are several common functions, such as Canvas() and xy_random(), which are always available in an inline_javascript item. See:

In JavaScript, experimental variables are stored as properties of the vars object. That's why you write vars.set_size and not directly set_size.

Now we define the function that draws distractors in the Shape Feature condition (above the rest of the script so far):

Now we define the function that draws distractors in the Color Feature condition (above the rest of the script so far):

Now we go all the way down to the details by defining the function that actually draws a shape to the canvas (above the rest of the script so far):

Importantly, Canvas functions accept a single object ({}) that specifies all parameters by name, like so:

Note that we have assigned the canvas as a property of the persistent object in the Prepare phase, which is why we can refer to it also in the Run phase.

To know if the participant responds correctly, we need to know the correct response. You can define this explicitly in the block_loop (as done in the beginner tutorial); but here we're going to use some simple JavaScript that checks whether the target is present or not, and defines the correct response accordingly.

To do this, insert a new inline_javascript at the start of trial_sequence, and rename it to correct_response_script. In the Prepare phase, enter the following code: 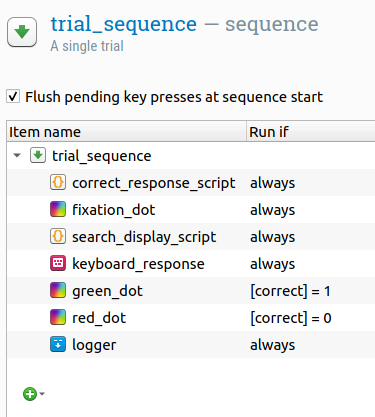 When you want to run an experiment in a browser, you cannot use all of OpenSesame's functionality. To check whether your experiment is able to run in a browser, you can use the OSWeb compatibility check by going to Menu → Tools → OSweb. If you've followed all the steps of this tutorial, the compatibility check will fail with the following warning (Figure 10):

Figure 10. The compatibility check may give warnings or errors.

This is a warning that the logger has the option 'Log all variables' enabled. Enabling this option is recommended when running an experiment on the desktop, in which case it's no problem to collect a lot of unnecessary information. However, enabling this option is not recommend when running an experiment online, because doing so results in unnecessarily large data files and consumes an unnecessary amount of bandwidth.

Therefore, go the logger, disable the 'Log all variables' option, and select only those variables that you actually need. You can do that by opening the variable inspector and dragging variables into the logger table (Figure 11). 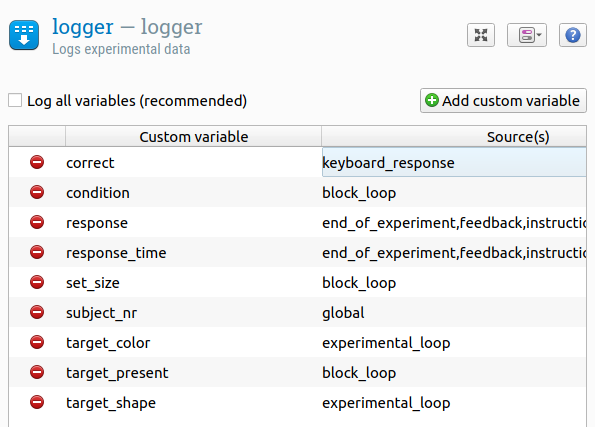 Figure 11. Logging only relevant variables is recommended when running an experiment online to save bandwidth.

For a list of functionality that is supported by OSWeb, see:

Congratulations, the experiment is complete! You can give it a test run by pressing on the toolbar button that shows a green circle with a gray play button inside (shortcut: Alt+Ctrl+W).